The world beneath the sea is undoubtedly breathtaking.

From the marine life to the sea creatures, it’s enough to get lost in it and forget all about what exists in the surface. Yet another recent marvel are underwater statues that have divers flocking from across the world.

Thinking of seeing them for yourself? Here are some of the most magnificent underwater statues you have to see to believe. 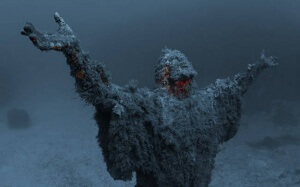 This statue was sculpted by Guido Galletti and based on the idea of an Italian diver named Duilio Marcante. It was placed in the Mediterranean Sea back in 1954 but was later resurfaced for restoration. It was then returned to the water sometime in 2004 for everyone to see again.

Otherwise known as the Atlantis Reef Project, the idea for the structure was first conceived by Gary Levine and designed by artist Kim Brandell. It’s better known as a cremation memorial site, with cremated remains being mixed with cement and memorial plaques later added. It spans across 16 acres of ocean floor and is now officially identified as a coral reef.

The Silent Evolution (Gulf of Mexico)

It’s considered as one of today’s most surreal underwater statues, and for good reason. It took sculptor Jason DeCaires Taylor and his team 18 months, required 120 tons of cement, sand and gravel, 3,800m of fiberglass, 400kg of silicone, 8,000 miles of red tape, 120 hours working underwater and $250,000. If that’s not jaw-dropping enough for you, it consists of 400 permanent life-size sculptures forming a monumental artificial reef.