Captures stunning photos of aircraft lost and forgotten for over 70 YEARS on the Pacific Ocean seabed.

Photographer Brandi Mueller filmed the planes about five miles off of the coast of Roi-Namur in the isolated Marshall Islands chain. The aircraft took pare in the US Armed Forces “island hoping” strategy designed to inch closer to Japan during WWII. This strategy eventually put the US Forces close enough to bombard Japan and ultimately end the war. 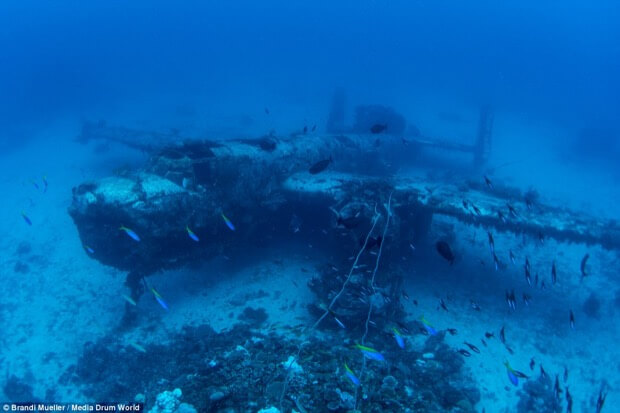 Excerpt from the Daily Mail UK

Brandi Mueller, from Cameron, Wisconsin, captured the planes while scuba diving around five miles from Roi-Namur in the Marshall Islands.
The 31-year-old was taking time off from her coastguard job to teach diving when she came across the incredible find.
She told MailOnline: ‘They call it the “Airplane Graveyard” – they aren’t war graves or planes that crashed. They were planes that were taken out over the reef and pushed off intact after the war ended.
‘For me, diving on airplanes, especially World War Two airplanes is really unique. Diving on shipwrecks seems normal, you expect ships to have sunk.
‘But seeing planes underwater is strange, planes don’t belong in the water, they belong in the sky, so it feel weird to dive on them. But amazing and special too. And because these planes didn’t sink because of the war they are special.
‘They should have flown more, lived longer, but they were sunk in perfect condition.’
Her pictures also show other Allied aircraft including Helldivers, B-25 Mitchell, Curtiss C-46 Commando and F4F Wildcats.
The planes would have been dumped into the ocean off of aircraft carriers and transport ships after the successful Pacific Campaign ended in victory for the US in August 1945.
They would have arrived onto the Marshall Islands during the battle of Kwajalein that raged from January to February 1944 as the US Marines and Navy conducted their ambitious ‘island hoping’ strategy to defeat Japan.
Almost 50,000 members of the US armed forces took part in the battle to take the Marshall Islands from Japan and from there could strike at Guam and eventually the Japanese mainland itself.
The battle for the control of Midway was one of the defining battles in World War Two.
The Allies had been fighting the Empire of Japan, which had crippled the American Pacific fleet with its attack on Pearl Harbor in 1941.
While the American Navy mounted a comeback, the Japanese military conquered island after island in the South Pacific.
But as the war continued, the Japanese began to suffer huge reversals.
One by one the islands fell under Allied control, they helped form a staging point for a greater Allied offensive in the Pacific — a key foothold in the region.

Check out the entire article 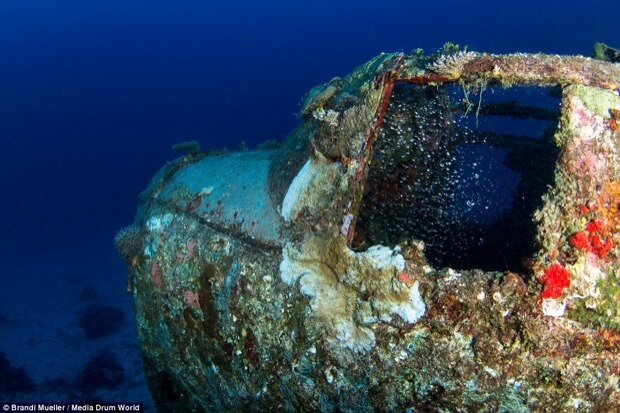