Fun as it is, scuba diving poses major threats especially among inexperienced divers.

Plenty have lost their lives during underwater explorations for a handful of reasons. One is that some divers fail to properly use their diving gear, which can be extremely heavy.

Think about it. That’s over 50kg of weight you have to carry with you. Maybe that’s why others opt for snorkeling instead.

But what seemed like a distant dream is now unfolding into a reality. Dyson Award runner-up Cathal Redmond may have just invented something that merges the world of diving and snorkeling.

Enter Express Dive. Reminiscent of a water bottle with a mouthpiece, the contraption aims to provide two minutes of air. For those who’d want to explore the deep sea just a tad bit longer but don’t want the massive diving equipment, this may just be the perfect gear.

Above water, Express Dive uses fans to draw in air using the mouthpiece. The air is then compressed and stored in a tiny, attached tank. When the person goes underwater, the collected air is then used through the mouthpiece. Small as it is, the contraption also tells you if you’re about to run out of air.

At 1 to 3kg, it’s not as lightweight as we hope it’d be but it sure beats 50kg. The product is currently at its testing stage and would need an actual diver to measure its effectiveness underwater.

Here’s to hoping the 27-year old makes it work and revolutionizes deep sea diving as we know it. 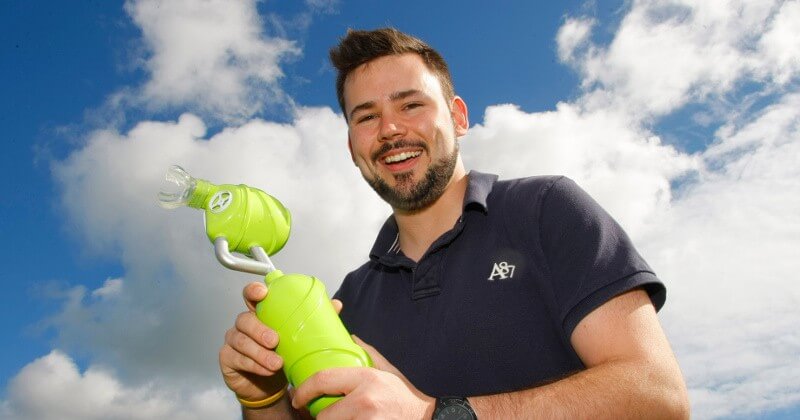